This 1944 Myron Hall photo shows St. Cloud Area Red Cross officials planning for their next project. Anne Kyle is sitting at her desk, John Henry standing on the right and Mrs. J. L. Rivard is off to the left.

Volunteers make a difference in any community. These generous individuals help the homeless, teach kids to read, and provide assistance during a natural disaster. This dedication helps not only those in need but inspires others to contribute what they can to make the world a better place.

Anna or Anne Sullivan Kyle (1891-1963) was one such person. She moved to St. Cloud, Minnesota from Minneapolis in 1926 and began volunteering for the American Red Cross. Anne reflected on what volunteering meant to her. She stated in a 1957 St. Cloud Times article, “It’s self-satisfying. And you get pleasure out of knowing that you have really helped others.” Even though the Red Cross was her primary concern, she did not limit herself to just one organization.

In this world, people should be kept busy on something worthwhile, either church work or some charitable work. It does everyone some good.

Kyle also volunteered for the Auxiliary at the Wallace S. Chute Post in 1927 and rapidly worked her way toward president of the Sixth District several years later. Soon Anne reached the state level as a member of the Rehabilitation Committee, one in which she chaired. In her spare time, Anne became president of the Women’s Guild and the St. Cloud Area Council of the Parent and Teachers Association.

Anne’s work with the Red Cross would in time transition into a staff position. Despite the death of her husband Edwin in 1938, she continued her efforts to help the St. Cloud community. In 1942, Anne was appointed Executive Secretary, encouraging others to volunteer and help in the war effort. Her humble philosophy, though, continued to be a model for others. “In this world, people should be kept busy on something worthwhile, either church work or some charitable work. It does everyone some good.” Almost sixty years later, Kyle’s words ring true about her commitment in making a better community.

Following a quick visit to our Red Cross centennial kick-off celebration in Minneapolis, my son Noah has had a lot of questions about the Red Cross.

And then, several days later, Noah’s 2nd grade class was given the option to dress-up as their favorite superhero. When I asked him that Tuesday evening (the day I received communication about dress-up day) if he wanted to dress-up he promptly responded, “YES!” He then stated he wanted to dress as a “real-life superhero,” a Red Cross volunteer.

I frantically emailed a co-worker, asking if there was any way I could purchase a Red Cross T-shirt. The co-worker came through as my Red Cross superhero with the shirt Noah’s wearing above.

Noah was beyond proud going to school dressed as a Red Cross superhero. And then, having the opportunity to walk with me in the St. Paul Winter Carnival parade was the icing on the cake! 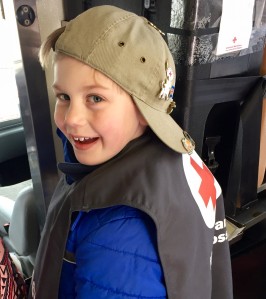 I’m so grateful to have the opportunity to expose my son to the Red Cross mission to reduce human suffering…it’s humbling and inspiring.

Click here to learn more about Minnesota Red Cross Century of Service events throughout 2017. Also, use the social media hashtag #MNRedCross100 to share your Red Cross stories with us. 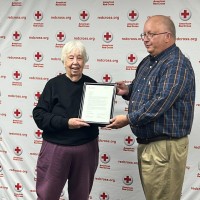