Story and photos by Scott Olson

It’s rare that you get to know exactly when and where a disaster will happen, before it actually happens. And then have time to pack a tidy bag and position yourself in the thick of it as whole thing begins to unfold. But that’s precisely the luxury I had on a blue-sky morning this May when American Red Cross volunteers (among others) participated in the Metropolitan Airports Commission (MAC) Airport Emergency Drill.

As a new member of the Red Cross Public Affairs Team, this was a perfect opportunity for me to get an inside look at the mechanisms that make up a large-scale emergency response. It started in a briefing room, where dozens of volunteer actors were given white envelopes containing their particular injury or ailments, a short bio, and even pseudonyms, like: Edith Bunker, George Costanza, and similar. They were told that they must behave in a manner consistent with their injury, but one trainer added “please don’t be too loud with your moaning and wailing.” Everyone was then ushered to a bus and transported to the disaster scene.

In this exercise a tornado had touched down on the tarmac and a retired DC-9 had been tossed around like ragdoll with all its occupants inside. I followed fire crews as they made ant trails in and out of the plane, carrying grinning victims to the safety of a nearby field. On hand was an impressive array of emergency service personal, MAC authorities and The Salvation Army—who attended to everyone’s dire need of hotdogs and Gatorade. Victims were triaged according to injury. Many of the less fortunate remained prone in the field or taken in ambulance, while others were escorted to a bus bound for the Survivors Center. The whole initial response appeared to be orderly and quite professional. Each emergency worker performed their duty with technical efficiency and a sober face.

At the Survivor Center victims were checked in with MAC authorities and passed over to volunteers with the Red Cross and Salvation Army, whereupon they were fed more hotdogs and interviewed. Here many of the minor injuries were treated, psychological counseling was administered, and fictitious families were reunited. At moments it was quite crowded, but even if I had ignored the Red Cross emblems, our presence could be readily identified by the concerned faces and caressing hands of our volunteers.

The last stop was The Operations and Joint Public Information Centers. After passing through a security check point, I stuck my nose into the COM room and watched the flurry of officials work the phones, point at maps and look generally busy—and they were very busy. Colored placards were poised on dozens of tables: Safety, Logistics, Communications, Operations, and a conspicuously red sign for The Red Cross. I was reminded of any one of the Hollywood movies and their depictions of just such rooms. The kind of sleeves-rolled-up orderly chaos that makes you thank your lucky stars you don’t have that kind of responsibility.

When the exercise concluded, there had been numerous fatalities and injuries, but everyone (including Jerry Seinfeld and Peggy Bundy) went home entirely unharmed, well-fed and very much alive. 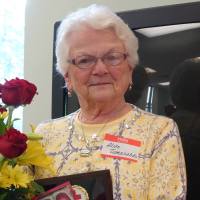