I have been a volunteer for the Red Cross since 2003. Based in Minnesota, I first started after I took several classes and became a volunteer to go to local fires and help the families after the incident. We provided those affected some funds depending on the severity of the fire. In our office counselors helped them with a lot of referrals to places like VEAP and Bridging to replace their personal items that were lost. It was always a comfort to them when we were there, especially in the middle of the night.

To date, I have been on about 20 deployments which have ranged from Hurricane Katrina (my first one) on the Gulf Coast to Hurricane Sandy in New York, and most recently the wildfires in Idaho and Montana. A deployment is when you are sent to volunteer at some type of a disaster usually in another state.

When I was deployed to Katrina, another volunteer and I drove the Emergency Response Vehicle better known as the ERV to Montgomery, AL to pick up a load of water and snacks. The ERV is the size of an ambulance and it is a feeding unit to go out in affected areas and feed those who are without electricity and maybe running water. We did 2 meals a day with a Baptist group cooking big kettles of food and there were maybe 20 ERV’s delivering food and water to all parts of the area. We were first assigned to Mobile, AL and drove anywhere up to a 50 miles range to serve lunch. We would serve hot food from a serving window in the truck and when finished or the food was all gone we would head back to our base camp and do it all over for dinner. All the people we served would be so appreciative as they hadn’t had a hot meal for 3-5 days by then.

Another disaster I worked on was the 35-W bridge collapse in Minneapolis. Another volunteer and I were in charge of seeing that there was hot food for the divers, police, federal officials when the first lady and again when the President came. We were only using 2 ERVs to send out food but had many volunteers who came to the Red Cross building to eat which is almost right under the bridge. I was able to go down on the river one evening and take food to the divers. Many days after the incident happened it was still a disturbing event to look up at the bridge and see cars still hanging there.

Hurricane Sandy was another unique disaster because of the size and how long the recovery went on and how large it was. By now I had changed from working with the feeding unit to the staffing unit. That job is to take care of the volunteers that are working on the disaster. They may be doing disaster assessment, mental health work, client casework and feeding those who are without a home, and most likely were staying in one of the many shelters the Red Cross operated across parts of New York, New Jersey and some of New England.

Because the job was so large for Sandy our Staff Services team was divided into several parts. I was the manager of all volunteers coming on the job and leaving the job. Some mornings we would have 50 new volunteers reporting to check in and get their assignments. The Red Cross headquarters where I worked for three weeks was two miles from my hotel. Every morning I walked past some interesting sights like the Good Morning America studio and the jumbotrons on Broadway. I picked up breakfast from a local deli or a street vendor and did the same on the walk back in the evening.

The night before Thanksgiving some of my group decided we would go up to Central Park and look at the parade floats. You cannot imagine the number of people who had decided to do the same thing. There were eight of us in our group and we had to hang on to the coat of the person in front of us or we would have been lost. We decided that we had walked about eight miles that evening, but it was fun. None us would do it again.

My most recent deployment was the Idaho and Montana wildfires. Half of my time there was spent in Kamiah, ID which is way up in the mountains. My workplace was the local American Legion. There was a reception center, called a MARC, that brought many groups into one place where those affected could get different kinds of help. There were 16 families that had totally lost their homes as they burned to the ground in a matter of minutes. Many others had lost part of their homes or all of their out buildings and a lot of cattle.

Everything the Red Cross does because of disasters–and we’ve had many this year ranging from Washington wildfires to South Carolina flooding–is done with help from caring people like us. The Red Cross is always grateful for our help. If any of you have 4-5 hours a week to volunteer, we always need more help. If it would not be your thing to go out to fires or to be deployed, there are simple jobs in the office that can be done, such as addressing birthday cards for volunteers. If you would like to become a Red Cross volunteer, just click here. 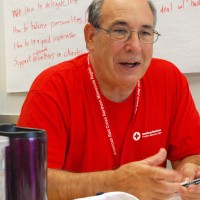