If a picture is worth a thousand words, then a conversation with Albert Fulton is worth a million. He has lived a cinematic kind of life—a story so incredible it’s hard to believe it’s true. And yet, Albert is the epitome of humility. His enthusiasm for sharing his life, especially the part about how the Red Cross helped him find his long-lost brother, is contagious.

Albert and Charles Fulton were born in Tennessee and raised in a family of eight children. They shared the same bed as kids, were only a grade apart in school, and did everything together. Everything, that is, except play the piano.

“Every single person in my family went in to music, except me,” Albert states defiantly. “There was no way I was gonna sit down at no piano. I was rough and tough and loved sports,” he adds in his charming southern drawl. Despite his mother’s innate musical talents, she was never able to pass on her gifts to Albert. It’s a good thing too, because instead, Albert poured himself into science and made huge advancements for his field.

Albert studied chemical engineering in college and would later go on to advancing the mammogram machine at Xerox, teaching Nuclear Physics at Yale, and becoming the Lead Engineer for NASA and the Department of Defense. For most people, even just one of these contributions would be commendable, but for Albert, he feels the proudest about the family he created. Today, Albert lives in Austin, Minnesota. He has seven children and 42 grandbabies, all of whom he talks with “almost every single day.” This value on family started when he was young and was cemented by the bond he had with his brother Charles.

Charles ended up doing many amazing things in his life as well. He studied music at the University of Munich and started his own opera company. He toured all over Europe and Africa blessing the world with his musical talent. Albert says it was during this time that they started to lose touch, however.

They were able to reconnect in 1967 at their mother’s funeral. But then afterward, Charles went back to Amsterdam and was never heard from again. Most of the Fulton family figured the worst had happened to Charles. They figured he had either “died or was in a mental institution.” But Albert knew Charles was just “off doing his own thing,” which is why he tirelessly started looking for him.

This was no easy feat, given the fact that email wasn’t widely used at that time, so after over thirty years of searching, he finally turned to the American Red Cross Minnesota Region for help. Through the international Restoring Family Links program, in a matter of two months the Red Cross had found his brother Charles.

Albert remembers the day Charles called him like it was yesterday. He immediately started asking Charles, “What’s your mama’s name?” and “What are the names of all of your brothers and sisters?,” hoping that the caller really was who he said he was. It wasn’t long before both brothers were crying and catching up, joking around and telling stories about their childhood. They talked for three hours that day and have stayed in touch ever since.

When asked if there were any hard feelings about Charles’s disappearance, Albert states emphatically, “Absolutely not! There’s no bad blood between us. No bad blood at all! He’s my brother.” And that is that.

Albert is undeniably grateful to the Red Cross for finding his brother Charles. He becomes teary-eyed and emotional just discussing it. “I love you all for it!” he keeps saying over and over again. He mentions as well that the timing couldn’t have been more perfect, as both brothers are fighting similar diagnoses of cancer. “We can now fight it together,” he states. “Thank you Red Cross. You have changed my life forever!” 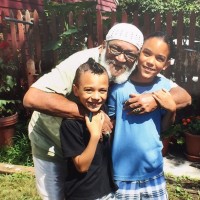