Everyone would rather be comfortable, cozy and warm in their own beds at night, but when there’s a fire people have to get out and sometimes stay out for days.

When a fire disaster hit the Whittier Co-op apartment building in Minneapolis on October 20, fire responders went across the street to see if a church could provide a safe place for displaced residents.

Walking out the Calvary Church door on Blaisdell Avenue was Matt Gresham, 45, who had just finished choir practice.

Normally he maintains the church building built more than 100 years ago.

“If this wasn’t here, I don’t know where these folks would go,” says Gresham.

Gresham and other church members invited people inside, giving them blankets and hot beverages. The church opened its doors to the Red Cross as well.

Around 20 people have stayed at the shelter since the blaze. Among them is Sharon Madigan, 62.

“I thought this fire was another false alarm,” says Madigan. “My brother, who lives one floor down from me, called and told me to get out. Outside, I looked up and saw the roof on fire.”

The church people, Madigan, says came to them and told everyone to come inside for hot coffee and to wait for the Red Cross, which was on its way.

Madigan, who has lived in the Whittier Co-op building for more than 30 years, says that she was able to return home and gather a few personal belongings. She says that her second night sleeping on a cot will be better than the first.

“I’ll be used to it,” says Madigan. “I have a roof over my head and I feel secure. I’m thankful for everything. It feels as if the Red Cross is doing everything for us.”

The Red Cross does a lot, but not everything. It depends on local communities to help during disasters, such as this building fire affecting more than 90 people.

Gresham, the man who opened the church doors after all, says that they’ll stay open as long as the displaced families need a place to be warm and safe. 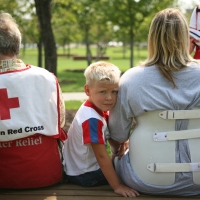