Silena Vega became a Red Cross disaster relief worker because of her mother.

“The last disaster my mother worked on was the Minneapolis bridge collapse,” says Vega. “When she finished she came home and told me to go sign up and volunteer for the Red Cross.”

Vega did exactly that and has not stopped since. Recently, disaster response became even more personal when tornado struck her home in Minneapolis on May 22. At the time, Vega was hundreds of miles away helping flood victims in the South.

“I tell people I was ‘chasing the river.’ First I deployed for the floods in Fargo, and then I moved down to Mississippi,” Vega explains. “And then I heard about the tornado back home.”

The news was filled with the Minneapolis event. Right away, Vega got a call.

“My fiance phoned to let me know that his father—my future father-in-law—could not be reached at his home in north Minneapolis, one of the hardest hit areas,” says Vega.

Suddenly Vega was caught in what every family separated during disaster experiences: are the people we love okay? While the storm may have torn up the street and houses in our neighborhood, we can be physically safe and still torn up inside from the uncertainty of wondering whether we would see our loved ones again. During the next 24 hours, Vega was in a state of turmoil while waiting to learn more.

“I went back to work,” says Vega, “But just imagine what it was like. I felt like I was working in a fog. A friend said I sounded scared and on the verge of crying. So, I phoned my local chapter to see if they could help me find my family.”

The American Red Cross has been facilitating communication between family members separated by disaster since World War II. Today, people can use the “Safe and Well” website to let their families know that they’re okay.

“He was out of touch for so long because downed trees made it very difficult to get around, because he had no cell phone, and because his cordless phone stopped working when the power failed,” Vega explains.

The news, she says, was a huge relief and comfort, especially while being far away from home. “With help from the Red Cross I got the information I needed.” 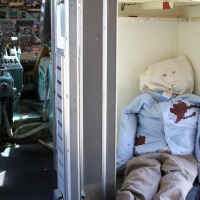