Olufine Fjeld was a busy farm wife when she wrote a letter to her family in Norway in 1918. There were chicks, goslings and children to tend to. There were crops to sow. There was weather to mind. Dangerous storms had recently swept across nearby areas, killing 18 people and injuring 150.  And there was patchwork to do for a quilt that would help raise money for the American Red Cross and its work during the Great War (WWI).

“I made a quilt with red, white and blue, which I gave to the Red Cross; I made a cloth for the middle square in the quilt, and sewed 48 small pieces which should resemble stars; then I sent the quilt to the Red Cross headquarters in St. Paul, Minnesota, and now one day I received a letter full of thanks and praise.”

Olufine felt the need to support the war effort. Her husband and oldest son both had registered for the military and waited for their call to service. She recognized the bounty in her life while others were forced to do with less or without.

“And now I hear that you have to use ration cards for foods; such things we have not seen here, yet it is only sugar and wheat flour we cannot buy in as large quantities as we have been used to; except for this, one can buy as much as one wants of everything else.”

Olufine was motivated to make a quilt made by hand–stitch by stitch for humanitarian relief. And winter was the time for her to finish the patchwork, sewing together cloth patches before sowing beans, cucumbers and pumpkins. For the patches she used silk patches purchased through a magazine.

“The ones I got this winter are smaller, the reason is, I guess, that everything is more expensive, and these large clothing magazines use the fabric in a better way; these patches are quite beautiful; some of them are all silk, some half silk.”

Like so many others during her time, Olufine stepped up to help others in need. She turned a personal passion into a means for easing the suffering of others. We can only hope that her quilt made its way to a home, bringing warmth and comfort. And that she continued for many more years writing home to her loveliest Norway.

“Now it is late, almost ten thirty, I have to go out and look after the small goslings before I go to bed…the best of greetings from Fina, and write soon.

Thank you, to Melanie Moser, for bringing her great-grandmother’s story to our attention. Thank you to historian Halvor Skurtviet for providing Olufine’s letter and translation from Norwegian. And thanks also to American Red Cross archivist Susan Watson for sending  along information about Red Cross quilts during the Great War.

Click here to learn more about the American Red Cross, its history and how you can get involved.

One Reply to “Chicks, Goslings and A Quilt for Red Cross” 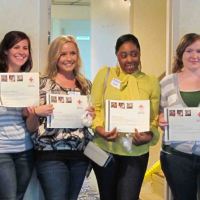