During my recent trip to FindLaw’s Bangalore office, I had the opportunity to visit the Indian Red Cross Society headquarters for Karnataka, the state in which our office and many of our employees reside. My interest in doing so was because, as a board member for the regional Red Cross based in the Twin Cities, I wanted to see how the Red Cross in India supports the citizens of the Karnataka region.

Most of you have heard of the Red Cross (or the Red Crescent in many parts of the world). Some of you might have benefited from the organization’s work. Your exposure to the Red Cross is likely from its blood drives — which supplies around 40% of the nation’s blood products — or its relief work after tornadoes, floods, fire or other disasters. Lesser known, but equally impactful, is Red Cross lifesaving training, such as First Aid, CPR and lifeguarding; and services to military families. The Red Cross is the only recognized organization that can connect American military families with deployed service personnel in times of emergencies. And finally, the Red Cross helps  reconnect families separated by crisis, conflict or migration. These efforts are best summed up by the Red Cross mission: “To prevent and alleviate human suffering wherever by mobilizing the power of volunteers and the generosity of donors.”

My first impression when entering the Red Cross office in Bangalore was the consistency of the mission. Just like the office in Minneapolis, the 7 fundamental principles of humanity, impartiality, neutrality, independence, voluntary service, unity and universality were posted where I entered the office. Additional similarities included the contributions to the blood supply in the state of Karnataka, disaster preparedness and response, and lifesaving training. Unique to this area was the focus on healthcare and nutrition for expectant mothers, providing eyeglasses and hearing aids to the impoverished, and administering Tuberculosis vaccinations across the region. Like the Red Cross in Minnesota, the Red Cross in Karnataka relies on donations from individuals and corporations and hundreds of volunteers to do its humanitarian work and training.

It made me feel good that the valuable services the Red Cross provides here in Minnesota holds true half-way around the world. It was a great visit.

If you’re involved with the Red Cross in your city or have benefited from the efforts of the Red Cross I would like to hear from you. Please comment below. To those who help support the Red Cross anywhere in the world — thank you. 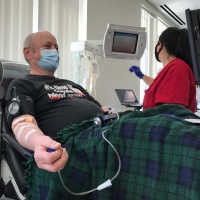