We had an awesome day in Lake City, Minnesota, on Saturday, April 18, installing smoke alarms and talking fire safety.  As part of the national American Red Cross Home Fire Preparedness Campaign, a local team of 25 Red Cross volunteers and volunteer partners canvassed 400 homes the previous week and gathered 115 smoke alarm installation requests. Three mobile home parks and a small area on the south side of the town were the designated areas. Then, this past weekend, 40 volunteers returned to homes that had no answer the week before, and to those with scheduled requests and installed smoke alarms. The teams installed a total of 164 alarms!! Volunteers also provided safety information, helped with creating fire escape plans, and handed out a tornado safety checklist. It was a great day and everyone did an amazing job.

Volunteers were made up of Red Cross volunteers, firefighters, Kiwanis members, and local community members. We had three Spanish language speakers who used their talent helping interpret for a few families. Everyone met at 8:30 a.m. for coffee, rolls, and training. Lake City’s fire chief Jeff Diepenbrock, and his wife Julie, came out Saturday to help install alarms. Jeff started off the day thanking the volunteers for their dedication and time. He also talked about fire safety and the importance of smoke alarms. Everyone set out about 9 a.m. and finished around noon. When everyone returned, it was great to hear some of the appreciation stories that families told where alarms were installed.

I am soooo thankful for the group of Red Cross volunteers in my areas!! This could not have been attempted, and become such a success, if it were not for the support of those who continue to be there when they can to lend a hand! Our smoke alarm installation event coordinators for the Lake City were Shar Yorde and Ann Nibbe who put in a lot of hours to make this happen.  A few of my experienced smoke alarm installation event volunteers from Winona, including Joe Whetstone, Mike Papke and Beth Lindholm from Winona, were instrumental in organizing the Lake City event and keeping things on track. Thank you to everyone who came out for this awesome day!! The Red Cross and our community are lucky to have you 🙂 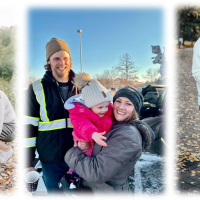