Rick’s got to get on a plane soon. So, let’s get right to this. Rick Emanuel (in the video below) is going south to support people affected by the powerful storm approaching the Gulf Coast.

This will be Rick’s third deployment to a major disaster response in just over a year. His first, last fall, was Hurricane Florence, where he worked at a shelter in Havelock, North Carolina. “Feeding, setting up cots, making sure everybody has what they need,” he says were the main things he did in his volunteer role supporting shelter operations for the American Red Cross. “And getting people to the right resources when they’re in crisis.”

In North Carolina, the water rose so fast in some areas that first responders, national guard soldiers and community helpers were bringing in people, especially the elderly, in massive dump trucks because those vehicles could reach them through the flood waters. “They were bringing in people as fast as they could,” he says. Supplies arrived anytime and needed to be off-loaded as fast as possible. Sometimes this was in the middle of the night when volunteers like him might get some sleep. “That was the biggest part of the deal, finding down time.”

With this deployment to Louisiana he’s even more ready to help others because he knows that “flexible is the word” when it comes to providing disaster relief.

If you would like to support disasters big and small, including training and deploying volunteers like Rick, visit redcross.org/mn. 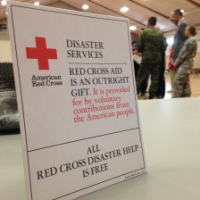